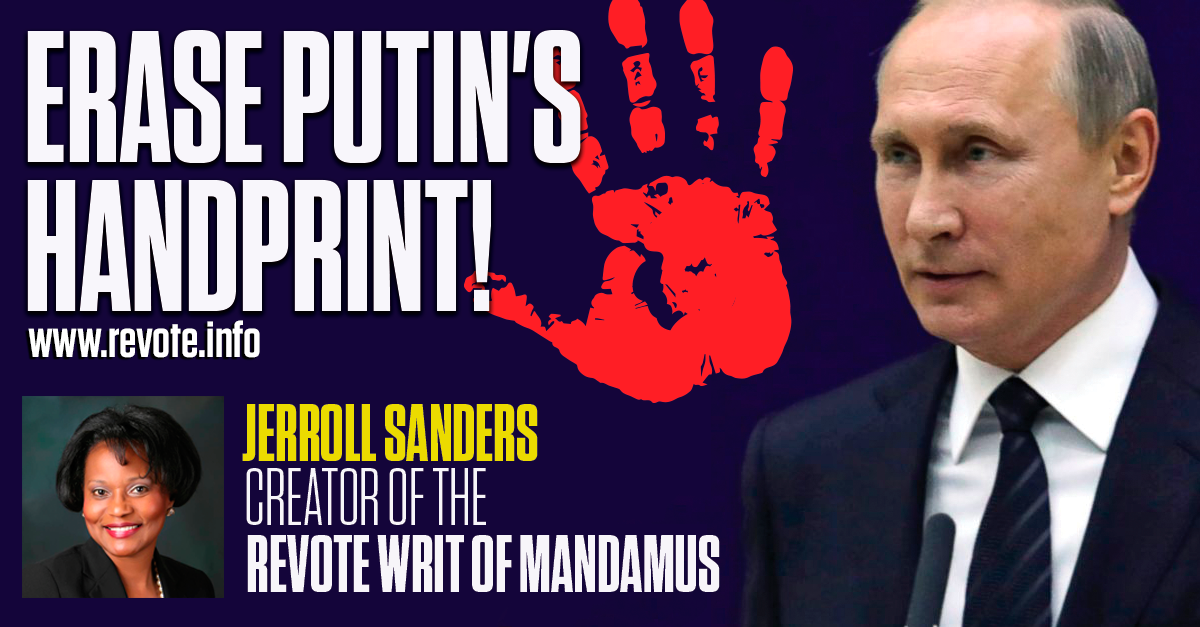 Op-ed by Jerroll M. Sanders, originator of the Revote Project

When top brass at the Internal Revenue Service (IRS) called upon me to retool the complicated taxpayer notices sent to hundreds of millions of taxpayers annually, I initiated the mammoth task by launching an enterprise-wide review of IRS processes and notices. Months later, I stood before then Commissioner Charles O. Rossotti who asked, “Do you have any idea what you have accomplished?” For years, I have engaged in the practice of process reengineering and innovative problem solving for America’s largest corporations and governmental entities. Never was my penchant for problem solving more peaked than on the eve of November 8, 2016—as election results streamed across my television screen. I was convinced that, like thieves in the night, Russia had invaded our election system with precision and purpose and we will never know conclusively what they did while they were there.

While pollsters scratched their heads, and broadcast commentators debated the wisdom of campaign strategies, I launched a revote campaign. A congressional candidate who had lost her congressional race joined me. While she shopped the skeletal revote legal brief I had drafted to various political camps, I posted a YouTube video calling for a revote and created an online revote petition at Change.org. During a broadcast of The Carl Nelson Show on WOL-AM 1450, I argued for a revote. Supporters of Clinton and Trump argued in favor of their candidate.

For weeks, the people who joined my effort and I were voices in the wilderness. On December 10, 2016, that changed when Former CIA Agent and CNN Commentator Robert Baer called for a revote during a CNN appearance. Baer said, “The Russians, it looks like to me, did interfere in our elections. We’ll never be able to decide whether they changed the outcomes; but I’ll tell you, having worked in the CIA, if we had been caught interfering in European elections or Asian elections, or anywhere in the world, those countries would call for new elections. Any democracy would.”

CNN Host and Chief Legal Correspondent Ari Melber responded to Baer with the same questions I have been forced to confront countless times when arguing on behalf of a revote. Melber said, “Bob, if I hear you correctly, are you saying we should have a new election? How would that work?” Baer explained that constitutional lawyers were better poised to answer Melber’s questions, but stood steadfast in his call for a revote.

My hopes that Baer’s appearance would give rise to a national discussion on a revote were quickly dashed. Major broadcast stations, media commentators and election officials have shown no interest in discussing a revote. Democrats—who were the targets of Russian hacking—have also remained largely silent on the subject, perhaps to avoid impugning the Obama Administration for an epic miscalculation. Silence on the part of Republicans, however, is more easily understood and undoubtedly emanates from their desire to retain the spoils of Putin’s hacking. After all, Putin handed them a clean sweep. They now control Congress and the Executive Branch and have the votes needed to reconstitute the U.S. Supreme Court and enact sweeping policies changes that will shape America’s destiny for the next 100 years.

Convinced Russia had determined election outcomes, I took note of a seldom-used provision in the U.S. Constitution known as the Guarantee Clause (Article 4, Section 4) and used it to formulate a legal argument that I shared with attorneys from esteemed law institutions and lawyer friends skilled in the practice of law. All advised me—a non-attorney—that the clause I had chosen was a “dead” clause; they emphasized there was no constitutional provision or law that could be used to secure a revote. I was convinced otherwise. So, I wrote the now infamous revote writ of mandamus and handed it to citizens in Denver, California and  Massachusetts to file in federal district courts on behalf of the people. I too was a Petitioner.

The Massachusetts Appeals Court was first to rule and cited the revote writ of mandamus as containing “novel constitutional claims.” I then commenced writing a revote appeals writ for citizen litigants to file at the U.S. Supreme Court. While the Supreme Court failed to assert jurisdiction over the revote case that listed the names of three women from Massachusetts, I remain convinced that the writ’s argument is spot on. It is irrefutable that:

Investigations to determine if Trump Administration officials or associates colluded with Russia to influence 2016 U.S. elections are ongoing. But little has been done to safeguard future elections or provide redress to the American people who are the victims of Russian hacking.

The people of this great nation must reject the notion that a national revote is impossible because the U.S. has never held a federal revote. We must insist upon our right to elect officials to the highest offices in our land by appealing to State Attorneys General to file an original jurisdiction revote case at the U.S. Supreme Court on citizens’ behalf. State Attorneys General have perfect legal standing to bring such a case, since the writ argues that the U.S. Government failed to protect States against invasion during the 2016 U.S. elections. An affirmative ruling from the U.S. Supreme Court declaring the 2016 elections unconstitutional would accomplish an unprecedented reset by nullifying all actions taken by the Trump Administration. It would also compel Congress to quickly enact revote legislation, hold a revote to erase Putin’s handprint from the 2016 elections and install national election safeguards that prevent unauthorized encroachments into U.S. election systems in the future.

Note: Sanders has a lawsuit pending against petitioners named on the original revote writ and members of Revote2017 for claiming they helped write the revote writ and devise the Article IV, Section 4, legal strategy. Revote2017 has returned to the U.S. Supreme Court with a citizen case that violates Sanders’ derivative rights as a copyright holder.

You have Successfully Subscribed!

Unwrinkled—Bringing Clarity Where There Is None